COFFEE GROWERS BREW UP A REVOLUTION

I have no great love for revolutions; Latin America for me is a place for vacations. Yet a few times I’ve rushed against dramatic political change—in Argentina when Peron returned to power, in Peru as an unwilling target in a riot, in Chile the week before Allende died.

And so I think I’d know the makings of a revolution if I saw it. The ingredients were there in a most unlikely place this summer, as I hitch-hiked alone through the jungles of southern Mexico. The elements were poor, deprived peasants, some innovative officials planning an international sellers’ “cooperative,” and a commodity that suddenly is in the news—coffee.

It was at the Mayan ruins of Palenque that I met Mexico’s President Luis Echeverria, who has pledged to take his government to the people as part of his “politics of dialogue.” And Echeverria introduced me to Fausto Cañtu Peña, director of the Instituto Mexicano del Café—Mexico’s coffee institute.

I did not take Cañtu Peña at first for a revolutionary, with his year at Harvard, his diplomatically-controlled impatience, his tired, restless eyes. But I soon learned of his campaign to improve the lot of his people. 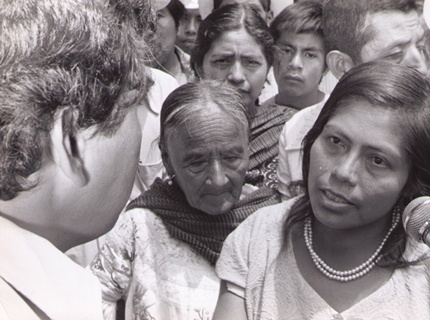 In San Cristobal de las Casas, a ragged Indian woman rushed from the mountain village crowd, grabbed Cañtu Peña’s hand, and tried to kiss it. He stopped her, and embraced her. “How old are you, mother? How many children do you have?” She thought she was about eighty; she’d had many children but only two survived. While she talked, he took all the bills from his wallet—several hundred pesos—and discreetly gave them to her.

Later I remarked on his compassion. He shrugged. “What is it to help one for a short time?” Chiapas is an agricultural area. The main crop is coffee. Most of it is grown by farmers with fewer than ten acres, fewer, even than two acres. They are thousands, living on less than a thousand dollars a year. When I’ve helped them all, I’ve done something worthwhile.”

“Wouldn’t that take a revolution?”

“Fat ones, dometic and international, who oppress these people and make it impossible for them to earn a decent livelihood, no matter how hard they work.”

“Show me your revolution,” I challenged.

Despite land reforms which have broken up large plantations, big landowners, because they have organization and marketing expertise, still control the agrarian economy. What do the thousands of campesinos do, each with the few bags of coffee they’ve grown? They sell it, for a nickel a pound, to men with the capital to build processing plants. The coffee is quickly processed—now worth 20 cents a pound—and exported. That’s where the real money is made. As usual, men who work longest and hardest receive least, while those who already have capital, plus the skill of buying low and selling high, earn most.

The town of Tapachula was celebrating the opening of Conasupo when we arrived. I’d seen Conasupos in many villages, but did not understand their purpose.

“They’re government-sponsored cooperatives,” explained an employee. Formerly, campesinos were forced to sell their products to middlemen, who took advantage of them in order to maximize their own profits. Now they can sell to Conasupo, which exports for them. They receive guaranteed minimum prices, so if world prices are low, they don’t starve. If prices are high, profits don’t go into the pocket of one man, but are distributed among the campesinos.

But a campesino receives only a nickel for a pound of unprocessed coffee, whereas processed coffee is worth twenty cents. “What about processing?” I ask. “Conasupo doesn’t do that, and an individual can’t do it for himself.”

“Collectively he can, and we’re encouraging him to do so,” says Cañtu Peña. “Go into the jungles and see for yourself what’s been built there.”

Through comic-book-type literature, campesinos are being shown how to build cooperatively-owned processing plants in their own communities. Money and technical assistance can be obtained from the government if the people will contribute labor and materials available in the region. Three years ago, 15 such processing plants existed. Now there are 203.

That sounds good, but it’s not impressive when compared with the need. Cooperation comes slowly when campesinos are mistrustful of a government which for generations has taken advantage of them.

I visited an experimental camp where information to improve production was being disseminated to the people by classes held at the camp, and by technical assistance teams going into the countryside. 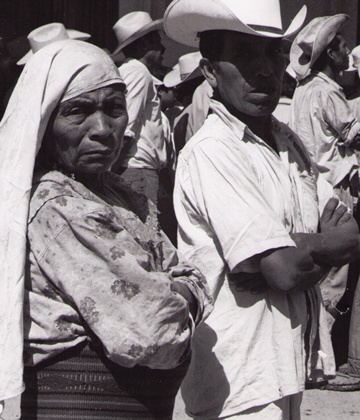 Government officials began to speak. Some were applauded. Some were not. A campesino took the podium. “You’ve given us land, but what good is land without seeds? He complained. “You teach us which fertilizer is best, but we haven’t money to buy it. You pay a guaranteed minimum price for our coffee, but the minimum isn’t enough.”

Another farmer, in rough clothes and mud-caked shoes, shouted, “When we take our coffee to Conasupo, sometimes we’re told you haven’t enough money to buy it. We’re forced to sell to coyotes (middlemen) for less. There’s corruption—you and you and you—“ He points and names three officials in the second and third rows, “are corrupt and should be removed. And you—” He points to Cañtu Peña. “You’ve made promises you haven’t kept!”

Cañtu Peña goes to the podium. “It’s true,” he says simply. “Sometimes we haven’t had enough money to buy all your crops. The minimum price isn’t enough, and you need more technical assistance. But you’re getting twice as much assistance as two years ago. You’ve received forty million pesos from the government to build your own processing plant. Your income is five times greater than it was five years ago.”

The people, hostile at first, now lean forward, unfold their arms, seem to accept. He continues.

“Today I talked to the president of Guatemala about ways our countries can cooperate to obtain beter prices in the international market. Tomorrow I’ll got to El Salvador for a meeting with other coffee-producing countries to discuss the same thing. We’re trying there, we’re trying here. This is my phone number in Mexico City. If you feel someone in this organization is corrupt, call me and there will be an investigation. But I can’t always be your policeman. You must organize.”

Cañtu Peña is working to build a new cooperative society. But old exploiters still exist, and perhaps future governments will be on their side.

“But why doesn’t the government give them more now?” I asked. “Some have land without water. They lack capital and technical assistance. They need those things today.”

“Campesinos need money to develop their lands, but what about the urban poor?” an architect interrupts. “We need a hundred thousand houses a year for slum dwellers in Mexico City but can afford only fifty thousand. And half of Mexico’s population is under eighteen. Do you realize how much we must spend on education? There’s only so much money. When it’s gone, whether well-spent or wasted, where do we get more? We’re not a rich country.”

“That same that would be considered fair for manufactured items—a price that covers the cost of production and allows the man who produces it a decent livelihood.”

No reminder is needed of the injustice which developed nations have perpetrated for generations upon people of the Third World who produce, coffee, chocolate, sugar, tropical fruits. In North America, bananas can be bought for twenty cents a pound because a man in Guatemala works for twenty cents an hour; coffee for less than two dollars because a man in Chiapas works for less than two dollars a day. To observe the life of an agricultural worker in any Third World country is to know that those luxuries are enjoyed at the expense of his well-being.

“You’re not strong enough to force rich countries to pay you a reasonable price,” I say. “They’ve always paid what they choose to pay, no more.”

To which Cañtu Peña replies, “Small countries, like small farmers, must unite and form marketing cooperatives. Together they’ll be able to demand reasonable prices for their products. The rich stop taking from the poor when the poor are strong enough to resist."

It is not an easy thing because small countries, like small farmers, aren’t accustomed to power.

But times change, and the time when the rich can make every decision has passed. This is a time when oppressed countries and oppressed people, by uniting, are becoming strong enough to take what’s rightfully theirs. This is the revolution.