MEXICO: HOW TO EDUCATE A POLITICIAN

In a little more than a month, Luis Echeverria Alvarez will end one of the most discussed presidential terms in Mexican history. During his six years in office he has emerged as an articulate spokesman for the “New Economic Order” proposed by Third World leaders, who frequently mention him as a potential secretary general of the United Nations.

Many North Americans, however, still find it difficult to sort out Echeverria’s record. The constant theme of his presidency has been the need to bridge the gap between the world’s haves and have-nots. Yet even in Mexico, where Echeverria’s power is considerable, that gap still yawns like a canyon. The question, then, remains: Has the Mexican president contributed anything but rhetoric to the dilemma?

If one measures Echeverria’s record against the revolutionary redistribution of wealth accomplished by such leaders as Mao Tse-tung and Fidel Castro, the answer is no. But Mexico, despite the limited character of its democracy, is not a totalitarian country. There as in the United States, change requires some popular consensus.

In Mexico, a historic social reality mitigates against the development of such a consensus. Those in power are usually ignorant of the needs, values, and contributions of the poor rural masses. Thus few of the nation’s leaders have ever been convinced that a redistribution of wealth and resources is necessary.

But the president of Mexico has an almost-unequaled ability to educate the powerful. This is precisely what Echeverria set out to do when he initiated what might be called a “peace corps for politicians”— a program of direct contact between Mexico’s ruling elite and the huge number of dispossessed people it governs.

During Echeverria’s term in office, various cabinet ministers, senior bureaucrats, and agency directors received periodic “requests” to leave their luxurious offices and accompany the president to remote parts of the country. These three- and four-day trips included not only stops in major cities but also visits to desert towns during periods of drought and to jungle villages during the rainy season.

Not long ago, I was traveling in Chiapas, Mexico’s relatively underdeveloped southernmost state, when I encountered one of Echeverria’s tours. At his invitation I joined the group, and from that vantage observed some of the effects the trip was having on its participants.

Simplicity was the keynote of the whole affair. That day’s lunch was served at an Indian ejido (a collectively-owned farm) deep in the jungle, and consisted of tropical fruit, nothing more. Transportation was provided by a single bus in which everyone rode together.

I accompanied the entourage on a 20-mile trip from Tapachula to Puerto Madero, and the bus was literally jammed with VIPs: Mexico’s president and vice-president, the chief justice of the Supreme Court, directors of various banks, heads of federal agencies, and nearly half the national cabinet. Security was provided by four special officers, two aboard the bus and two traveling ahead in a local police car. This virtual absence of normal security precautions might be considered evidence of presidential recklessness or personal courage; either way, it was an effective lesson in trust for the officials aboard. 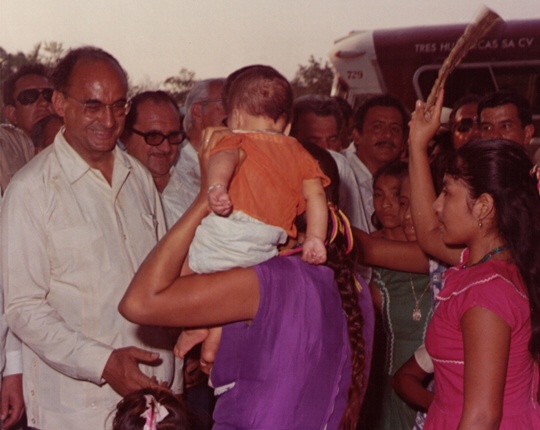 The real educational process, however, began when the officials left the bus and entered rural villages on foot. For example, while visiting a government rabbit farm, we were told that the animals—an important new source of meat for Mexico’s protein-starved regions—were reproducing faster than local people could be persuaded to eat them. The officials immediately began to discuss ways of educating the people to add rabbit to their diet. Most of the speakers seemed to assume that the Indians were ignorant and tradition-bound to the point of superstition.

But one minister felt otherwise. “They (the Indians) say it is unwise for them to develop taste for our food because we don’t pay enough for their products and so they can’t afford to buy ours. The capitalist economy has exploited them, still does. One way they’ve survived is by remaining independent of it. It appears that they’re more sophisticated about the socio-economic implications of this program than we are.”

Farther down the road we visited a charming model house which had been constructed as a prototype for the poor of Southern Mexico. How reasonable the dwelling must have seemed to Director Joaquin Martinez Chavaria when his agency developed it back home in Mexico City. But having seen the level at which Chiapas’ poor subsisted, he now understood just how inadequate a bureaucratically-conceived solution can be.

“What good is a modern bathroom to a family that doesn’t yet have pure drinking water?” he muttered in frustration. “How stupid individual kitchens when there’s not enough to eat half the year. Food and health, not houses such as these, should be our first priority.”

But do programs, priorities, and, above all, politicians actually change as a result of such experiences among the poor? Many, I’m sure, do not. Yet some do.

Fausto Cañtu Peña, Director of the Mexican Coffee Institute, might never have been more than a wealthy executive had Echeverria not insisted that he examine, in human terms, the problems and possibilities of his programs. Cantu Pena did so, and for the first time in 20 years, the Coffee Institute is actively working to stabilize commodity prices on the international market and to prevent the exploitation of small farmers by big exporters.

This element of personal involvement might well be Echeverria’s most significant contribution to Mexican politics. Indeed, one of the beneficiaries of the outgoing president’s program is his successor, Jose Lopez Portillo, who has already traveled thousands of miles through the countryside.

Lopez Portillo has promised to continue Echeverria’s “peace corps for politicians.” If he does, Mexico may someday provide other Third World nations with an effective prototype for dispelling the suspicion and alleviating the exploitation that so often separates the urban elite from rural masses in developing countries.

In that event, Echeverria will truly have left the world’s have-nots an enduring legacy.